With President’s Day right around the corner I want to recommend a couple of books for the holiday.

But not just any presidential novel, just referencing the president, or involving a fictional president.

I love novels that bring the thoughts, words, motivations and adventures of a past President to life through a fictionalized (and sometimes fantastical) story.

Think of the story of George Washington and the Cherry Tree.

Americans tend to think of Washington as someone who always tells the truth.  Why?

It's true that stories don’t just give us the history of people and places of the past they also shape our image and what we associate them with.

In Mason Locke Weems’s A History of the Life and Death, Virtues and Exploits of General George Washington, first published in 1918, Washington is asked by his father who cut down the cherry tree and replies “I can’t tell a lie, Pa; you know I can’t tell a lie. I did cut it with my hatchet.”

This (quite possibly fictional) cherry tree anecdote "went on to be reprinted in the popular McGuffey Reader used by schoolchildren, making it part of the culture, causing Washington's February 22 birthday to be celebrated with cherry dishes, with the cherry often claimed to be a favorite of his", according to Wikipedia.

The varied personas of many past president has given way to different narratives.

Even the most recent president inspired a unique novel written as a commission report similar to the 9/11 commission report called The 2020 Commission Report on the North Korean Nuclear Attacks Against the United States: A Speculative Novel by Jeffery Lewis.

Below are some fictionalized novels I have particularly enjoyed recently, featuring Abraham Lincoln and Barack Obama.

Lincoln’s novels are the most varied in terms of style and themes, while Obama’s are mystery novels. Enjoy.

Lincoln in the Bardo

Set in the Oak Hill Cemetery in Georgetown Lincoln in the Bardo focuses on the death of William Wallace Lincoln and Abraham’s state of mind in that period. This is a novel focused on death on how one process it and on moving on from it. I highly recommend the audiobook which won the 2018 Audie audiobook of the year and featuring  and a voice cast of 166 different people

In this novel the author finds Lincoln’s secret journal and writes a biography of his secret war against vampires. This is a personal vendetta that takes Lincoln from his childhood to his presidency and the civil war. The book became a feature movie in 2012

The Impeachment of Abraham Lincoln

The Impeachment of Abraham Lincoln by Stephen Carter asks a big what if in What if Abraham Lincoln had not been assassinated by John Wilkes Booth.  In this novel Lincoln faces impeachment after the Civil War and it is up to a promising young  lawyer to defend Lincoln against impeachment.

These are 15 stories told in the 1930s style noir pulp novels.  These stories satirize some of the conspiracy theories that came about during Obama’s Presidency. From dystopian futures to secret societies to super spies this anthology is a light hearted spin on some of the absurd theories. 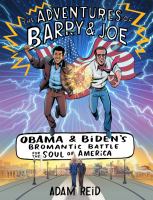 The adventures of Barry & Joe : Obama and Biden's bromantic battle for the soul of America

A graphic novel where Barack Obama and Joe Biden time travel to younger versions of themselves in order to alter the course of history.  This comical novel is more of a random series of vignettes than a cohesive narrative.

An offbeat and witty novel by Andrew Shaffer is a mystery novel starring Obama and Biden as the primary sleuths. When Biden’s favorite train conductor dies, Biden calls upon Obama to help him solve the murder and find the source of Delaware’s Opioid epidemic.