If you have an elementary or middle-school-aged kid in your life, there’s a good chance you’ve at least heard of one of the hottest video games out there: Minecraft.  My seven year old is obsessed with it, and we recently threw him a Minecraft-themed birthday party, including an Enderman piñata, Creeper bean bag toss, and TNT Block birthday cake.

When my son first wanted to start playing Minecraft, I didn’t know anything about it, so we sat down with our Xbox 360 and started exploring it together. Now over a year later, he knows WAY more than I do about redstone mechanisms and other Minecraft items, but I am glad that I spent the time playing the game with him so I am familiar with what the game is all about.

Not every parent has the time or inclination to play for hours (and it can easily become *hours* when you get into building something that interests you!), so if your child is a Minecrafting maniac and you want a better handle on the Minecraft hullabaloo, check out some of the books below that DPPL and our consortium libraries offer to learn about the world of Minecraft.  We also have copies of the game you can borrow for the Xbox 360 and PS3 platforms so you can try it out yourself!

Your child might also be interested in our Minecraft Mondays sessions, where kids in grades 4-8 can play Minecraft in the library’s computer lab with other Minecrafters.  Registration for each Monday’s hour-long sessions opens up at 9am that morning and they fill up fast, so if your Minecrafter would like to attend, make sure they log on to our site at 9am that day to register!

Learn the basics of Minecraft, including how to survive your first night in Survival mode, in this official guide from Mojang, the creators of Minecraft.

Once you've got the basics down, learn how to use redstone to build circuits and other powered mechanisms with this official guide from Mojang.

The Minecraft Guide for Parents

This guide written specifically for parents covers the basics of playing the game, but also addresses parental concerns such as online play and screentime limits. 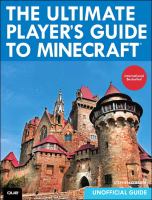 The Ultimate Player's Guide to Minecraft

This comprehensive guide covers not only Minecraft basics, but also play on the various platforms (Mac/PC, Xbox 360, Playstation 3 and iOS), single and multiplayer play, and mods. 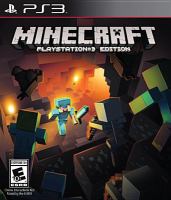